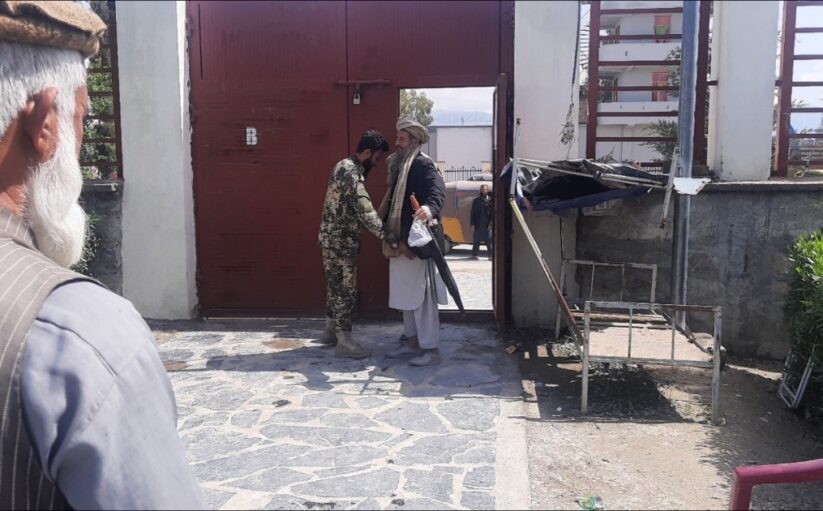 A policeman searches a man entering the Laghman provincial hospital

Hundreds of patients and their accompanying persons visit Laghman Provincial Hospital every day. Some visitors are armed and claim to be local police and others who carry guns for what they claim is personal protection but use their weapons to threaten doctors and personnel as well as other visitors so that they get quick and preferential treatment. There are regular verbal and physical fights at the hospital where doctors and visitors are insulted, threatened, and even beaten up.

When the trained community volunteers who monitor the hospital twice a week visited the hospital, they noticed armed men in the premises with vehicles and motorcycles driving right and left among the people, they decided to try to find a solution to this situation. The volunteers approached the policy department and requested a security checkpoint to be created at the hospital but they had no success. They then referred the issue to the governor’s office and provided the office with details about these problems which the community were facing at the hospital.

After months of back-and-forth advocacy with the government agencies at Laghman Province, a police checkpoint was created at the hospital. It includes half a dozen police personnel stationed in a container at the hospital entrance. The police check everyone who enters the hospital, prevents arms being taken inside the premises and also stops vehicles going inside.

The environment at the hospital has changed quite significantly now. It is calm and everyone follows the queues. Also, when there are problems at the hospital, the police are there to prevent it from scaling up to physical fighting. The doctors & hospital staff are particularly happy with the situation now.